Helping refugees in South Sudan one falafel at a time

The opportunity to share a new recipe can mean more than introducing ingredients and flavors to a fresh audience. For former refugee Albert Maribaga, it’s a chance to help those in need.

Maribaga, who fled South Sudan more than 17 years ago, resettled in Lincoln, Nebraska, and now wants to find a way to give back to the people he left behind. He works for Catholic Social Services, the same agency that helped him and his family resettle in Nebraska as refugees all those years ago.

Today, he’s helping other refugees find employment. But on March 16, he was the honorary chef at Gianna’s Java & Gelato, a coffee and gelato shop adjacent to the Catholic Social Services building on O Street.  His recipe for falafel was being featured in the shop’s Lenten Lunches series.

Lenten Lunches, new in 2018, allowed general manager Jake Mousel to branch out from traditional Lenten food choices. During Lent, Catholics are asked to abstain from meat on Fridays, so many Bchurches and Catholic organizations offer fish frys.

But Mousel wanted to do something different.

“What are we going to have that’s not fish?” he thought.

So, he talked to the refugee department at Catholic Social Services, and from there was able to find resettled people willing to share their recipes. In February and March Gianna’s hosted and provided meals from South Sudan and Afghanistan. According to Mousel, both meals sold out.

But Maribaga had a larger purpose in mind for his lunch of falafel and potato wedges. A sign on the shop’s counter announced his goal:  “Free-will donations will help the chef (Albert) send a shipping container to South Sudan.”

And that’s where Maribaga turned sharing a recipe into making a difference.

Having left South Sudan, Maribaga knows what people still there need, other than a safe place to call home.

“They just want to live there as normal people.” he said.

South Sudan has been in turmoil since its second civil war began in the 1980s. Human Rights Watch’s “World Report 2017” estimates that 2.4 million citizens have been displaced and forced to flee their homes. Many flock to safe spaces, including camps and often churches.

Maribaga estimates that 15,000 sought shelter at St. Mary’s, a church in his hometown.

“That’s the safest place for them to go to,”  he said.

Maribaga knows the people there need clothes, and he knows he could fill a container of them.

But shipping containers are expensive. A single 20-foot container costs about $3,000, Maribaga said. It then needs to be filled, put on a truck, transported, cleared with customs, put on another truck and taken to the refugee camps before finally being organized by volunteers.

It’s a big task, but he’ll get there one falafel at a time.

For him, it’s all about helping others. Maribaga said the blessings he has, he can bring to others and just try to do a little from God’s teachings.

“Why not do something to help others?” 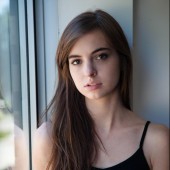 Bosnian refugees in Lincoln sew their way to an American Dream

For Sudanese artist, creating is meditating