As someone who loves history and learning about the past, I am constantly in search of where I came from and why I am the person I am today. I quickly learned that there isn’t much information on my ancestors and why they immigrated into the United States. But I do know that I come from a long line of strong and independent women.

The ancestry of the maternal side of my family is from Canada and England, and it is unclear from the few sources we have whether Elizabeth Naddy, who would be my great-great grandmother, was born in the United States or immigrated later in her life.

Elizabeth Naddy of French Canadian descent, in the late 1800s.

Elizabeth was a French-Canadian and one of the first with whom I greatly identify. Her husband, Charles Doody, an Englishman, was the reason behind her need for independence.  A family letter states that Doody was known as a playboy and that when Elizabeth found out, she packed up everything and left Chicago. She was pregnant at the time and would later give birth to Nelson Robert Whitmarsh, who would become my great-grandfather.

But it was Nelson’s wife – Margaret Esther Lynch — who would become independent woman Number Two in my line of ancestry.

Margaret’s immigration story is unclear, but she is believed to be of Irish descent. Because she immigrated in 1900, the thought is that her family came to the U.S. to escape famine and British repression.

Because of their strong work ethic, her family became wealthy in the U.S., but Margaret walked away from all of it, not liking how having money made her family behave. She then married Nelson and together they raised four children but that didn’t stop her from making her mark on the world. Margaret grew up during the Roaring 20s and was a forced to be reckoned with. She was known as a flapper and broke female barriers for the time period. Her fourth child, Elizabeth Anne Whitmarsh, would become my grandmother.

Elizabeth, better known as Betty, spent most of her life in Texas after her family moved there from Chicago. Her freshman year of high school was the only year she attended a co-ed school, having only ever attended all girl Catholic schools. She met my future grandfather, Andrew Preston Hackler, in algebra class. After that year, she returned to Catholic school and it wasn’t until their junior year she and Andrew reconnected.

Elizabeth’s demonstrated her independence by dating someone whom the Catholic nuns deemed a “bad boy.” He wore a leather jacket and rolled jeans. She was undaunted even when the nuns restricted Andrew from picking her up out front of the school. They got married two days after Elizabeth’s 18th birthday and proceeded to have 11 children.

Their seventh child happens to be my mother, Susan Lynn Watkins. The three previous women in my family line were strong and independent, as is my mother. She joined the United States Marine Corps at the age of 19. Not only did she serve our country but raised four children alone and has managed to put all of us through college and some through graduate school. 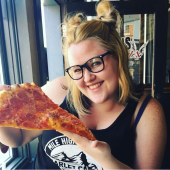