Growing up, my mother was always fine.

Not because growing up on a little farm in Nebraska as one of eight children was easy, because it wasn’t.

But because “fine” was the only way to she knew how to respond to the question “How are you?” in Polish.

Her parents never taught her nor her siblings more of the language.

“The only time they spoke to each other in Polish was when we were in trouble,” my mom said with a laugh, remembering all the trouble she and her siblings found themselves in growing up in Silver Creek, a Nebraska town of 360 people today.

But the answer to why the children were never taught the Polish language is focused largely on the immigration story of her grandparents.

My mother’s paternal grandfather, Louis Paczosa, emigrated from Muszyna, Poland, to America in 1901 when he was 17 and already had one brother living in the U.S.

He wanted to own land and escape the rise of communism and the persecution of Roman Catholics in Poland. This persecution would escalate throughout the mid-1900s as Poland, which is located between Germany and Russia, was annexed by both countries and was forced to act under communist rule.

When Paczosa arrived in America, he passed through Ellis Island and went on to Pennsylvania to work in a coal mine. He next moved to Sioux City, Iowa, to work in a meat packing plant. While living in Iowa, he met Katherine Tragarz and they were later married. Katherine worked for a priest who was transferred to Duncan, and that’s how our family ended up in Nebraska.

After moving, Paczosa began working for the brother of the priest who was a farmer. Once he had saved up enough money, he bought his own section of land on the edge of Duncan that is still in our family today. He and Katherine went on to have nine children.

One of these children is my grandfather Ray Paczosa. Growing up, Ray disliked that his parents never learned English and frequently had to translate for his parents.

Because of this, and the pride he felt for his American heritage, he was adamant that his children were educated and spoke English. My grandfather was still proud to be Polish but his time serving in World War II made him fiercely patriotic for the land of opportunity.

Ray, who would go on to spend his whole life farming, met Virginia, who would become his wife, after the war. Her grandparents had emigrated from Tarnów, Poland, in 1858.

Today my mother, Jackie Kernick, is proud to have been born to hard-working Polish parents.

“It’s very rare to be 100 percent anything anymore,” my mother said of her Polish heritage. “If it hadn’t been for the perseverance of those generations before me, I wouldn’t have the core values that I do.”

Those core values are that of the American dream: work hard and you will be rewarded. Growing up on a small farm with 10 family members, my mom remembers how they wasted nothing.

They grew their own food, milked their own cows and used the chickens as a garbage disposal.

Pride and love of pierogi

She was raised with pride to be an American, but also in the heritage of her homeland, which included large families and Roman Catholicism.

My mother has left some things from this life behind. She only has two kids, traded in priests for pastors and moved away from the farming background that built our family.

But her pride, her resilience, her fight and her love of pierogi keep her close to her roots and me as well.

From the polka band at my high school graduation party to the always present kielbasa (Polish sausage) at family events, my Polish heritage is a strong source of my identity.

Grandmother Virginia Paczosa did not have this same sense of pride. When her grandmother, Kathyrn, whose maiden name was Smolenski, immigrated she changed her last name to Smole. Many Poles removed the “ski” from their names when they passed through Ellis Island so people wouldn’t know they were Polish because of the prejudice shown to immigrants.

This immigrant identity often bothered my grandmother as she thought her children would be ridiculed for being unintelligent and poor if others knew they were Polish. As she grew older, some of her pride returned and it made me curious to learn the heritage of my babushka.

And that curiosity has stuck as I find myself strongly identifying with my Polish heritage.

Today I say Polish slang words that I do not know how to spell correctly but use to jokingly insult my brother.

Despite my mother breaking the long-standing Catholic heritage, I still know many of the sacred prayers and will repeat with fervor that Pope John Paul II was the best there ever was.

After my mother’s parents died and I graduated high school, my mother and I traveled to Poland to see where we came from. During this trip, one more part of who I am made sense.

The bump on my nose had a reason: It was a feature of my eastern European descent.

I find that today I am also fine. Not just because it’s the only Polish response I know to the question, but because those who came before me worked so hard so that I would be. 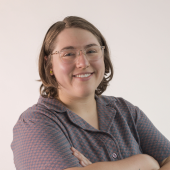 Globalization runs in my family

My family found the jackpot in America